These ultrasound images  large calculi are so called because they occupy a significant proportion of the collecting system, giving the appearance of a staghorn on X-ray (Fig.ultrasound images below). 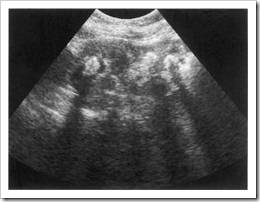 A staghorn calculus fills the entire PCS of the kidney. A sagittal section through the lateral aspect of the kidney gives the impression of several separate stones, although this is, in fact, a single calculus. They may be less obvious on ultrasound than on X-ray, casting a dense shadow from the PCS which may obscure any associated dilatation and can, in small, atrophied kidneys, be misinterpreted as shadowing from bowel gas. Because of the lobulated shape of the calculus it may appear as several separate calculi on ultrasound. A coronal section may therefore be more successful in confirming a staghorn calculus than a sagittal section.
related to the medullary pyramids and is frequently associated with medullary sponge kidney (see below). It may also be seen in papillary necrosis and in patients with disorders of calcium metabolism, e.g. hyperparathyroidism. Nephrocalcinosis may affect some or all of the pyramids. A regular arrangement of hyperechoic pyramids are seen which may shadow if large calcific foci are present, but not if the foci are numerous and tiny, as they are smaller than the beam width (Fig.ultrasound images below). Less frequently, calcification is seen in the renal cortex. 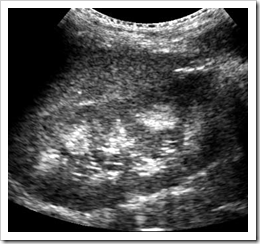 Ultrasound images Nephrocalcinosis, demonstrating deposists of calcium within the renal pyramids which are too small to cast an acoustic shadow. 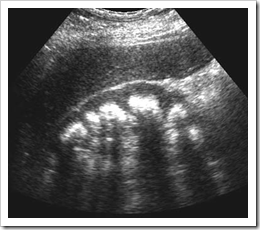 Ultrasound images Calcification in the renal pyramids with strong acoustic shadowing. compensatory hyperplasia of the parathyroidglands. There is a high incidence of hyperparathyroidism secondary to chronic renal failure in patients on dialysis; scintigraphy may demonstrate the region of increased activity and ultrasound is particularly suitable for demonstrating the enlarged parathyroid, guiding a diagnostic aspiration and, if necessary, ablating the gland with ethanol as an alternative to surgical removal. Alcohol ablation is generally reserved for those patients deemed to be a poor surgical risk.
LiveJournal Tags: Ultrasound images Staghorn calculi